Like doors, keyholes are very much part of our everyday lives. But how often do we stop to think what they symbolize?

Artist and mentor Prajakta Potnis’ project dealt with exactly this- the corresponding emotions of security, privacy and even jealousy and then later the ideas and concepts that ensued, consciously fuelled their minds when the students were faced with just a simple keyhole and all it represented. From a key hole one can look into a new world, one that is in some sense forbidden or protected, a world that may evoke the bubbling emotions of curiosity and wonderment, or even horror and shock. The possibilities are endless. Ideas like these helped the students grasp the concept and from there their imagination took over to create something original and as always personal and laden with individuality. 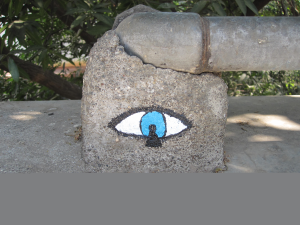 After documenting their thoughts they were instructed to make and place their own keyholes in the artist’s studio after exploring it and finding a strategic position for their creations. There was meant to be a meaningful reason to their placement.

“People usually hid or bury things underground. What I’ve done is something different. I placed the keyhole within the shadow of a bulb. The shadow is imaginary, thus no one can find my hiding place.”

Each one of them chose an interesting location for their keyholes. Various concepts and reasons rose out of personal thoughts and even religious beliefs. For one child looking out of a keyhole was his only escape out of the darkness in his mind- a chance to feel alive. Similarly another student’s idea originated from the Islamic superstition, that one mustn’t look into the mirror at night, and hence he placed his keyhole on the mirror as a symbol of forbiddance. 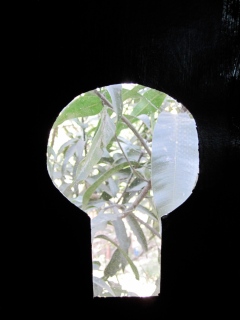 Apart from the personal dimension to the project, some of them decided to add a socio- economic aspect that reflected an advanced meaning to their interpretation and collection of thoughts.

“I wanted to show how basic necessities are extremely valuable for many, especially in the city, which claims to be the economic capital of the country- Mumbai. A keyhole on the flush would show how only people who own it could gain access and utilise the toilet, since most of our population is unable to afford sanitation facilities.” 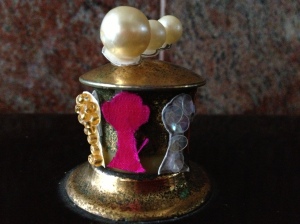 Simple ideas developed into complex streams of thought and flowed out onto the different nooks and corners of the studio. Keyholes either painted or made of M-Seal and wire started taking shape on the ceiling fan, gas cylinder, pipes, door and even the ground.

This project not only had the students explore and adapt to a new environment, the artist’s studio, it also involved making the best of what they had, handling the space, and figuring out what would look good where while retaining the original concept behind the work. An on-site installation was new kind of project for the students.

Prajakta Potnis’ sessions brought into focus how the littlest thing, like a keyhole, can coax the unraveling of the students’ imaginations and lead to special narratives.

Written by Trisha Salvi for Art1st