Master Class: Exploring the Knife technique of our Master Artists! 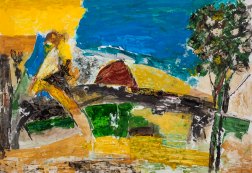 The creative journey began with the mentor introducing them to the concept of the technique. They were told about the magical quality that the knife bore, where they could use one to paint, instead of the quintessential brush! 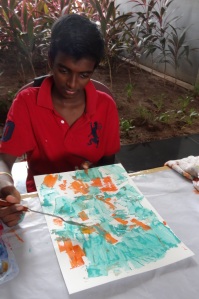 The mentor acquainted the students to some of the great stalwarts in the field who used the technique in their work. Paintings of Ram Kumar and H.A Gade were chosen to set the tone of the session.  Our young artists took turns to express what they read into in these paintings. “Oh that’s a cliff, that is a storm in the sea and those old buildings make me feel like I am in Venice.” There were a profusion of interpretations on the part of the kids.

Drawing inspiration from the master artworks, our studio mavericks dabbled in the technique. They were initiated into the technique by learning how to grasp the knife this was followed by forming different forms of lines and shapes. The session culminated with each child making his/her own novel composition using the same novel master technique!