“Less and less frequently do we encounter people with the ability to tell a tale properly. More and more often there is embarrassment all around when the wish to hear a story is expressed. It is as if something that seemed inalienable to us, the securest among our possessions, were taken from us: the ability to exchange experiences.”
WALTER BENJAMIN

Gone are the days when grandmothers and mothers narrated stories to their children. In today’s world children very rarely get a chance to listen to other’s stories or share their own stories.
So let’s give a chance to our children , who have a lot to say, and a lot to express and explore. Let’s unravel the stories nesting within them by letting them discover the thrill of traditional and computer animation. Let them also for once experience a sense of wonder. Imagine their joy when they discover that they could learn how to bring their stories and characters to life, that they could give life to their very own tom and jerry.

In the era of Animation and Visual Effects, have our children ever wondered?
• Where it all began?
• How and who bridged the gap between the still, hand drawn images and the animations of this day?
• What history has to offer in terms of this development?
• How did image move in the ages devoid of camera?

This year’s Master class will be based on the above mentioned idea, consisting of a series of 3 workshops on:
1. Flip book
2. Zoetrope
3. Stop motion animation
The workshop will commence with a screening of few animation movies that would enhance story telling abilities. From the second day onwards children would gradually be, introduced to various methodologies of creating an illusion of movement using multiple drawings and devices like Flip Book, Zoetrope and Camera.

Flip Book
A flip book is a book with a series of pictures that vary gradually from one page to the next, so that when the pages are turned rapidly, the pictures appear to animate by simulating motion or some other change. It is a fun exercise and children just love it.

Zoetrope
A zoetrope is one of several pre-film animation devices that produce the illusion of motion by displaying a sequence of drawings or photographs showing progressive phases of that motion.
The zoetrope consists of a cylinder with slits cut vertically in the sides. On the inner surface of the cylinder is a band with images from a set of sequenced pictures. As the cylinder spins, the user looks through the slits at the pictures across. The scanning of the slits keeps the pictures from simply blurring together, and the user sees a rapid succession of images, producing the illusion of motion.

Stop motion Animation.
Stop motion animation explores the above discussed phenomenon’s using a camera. The object is physically manipulated and moved in small increments between individually photographed frames, creating the illusion of movement when the series of frames is played as a continuous sequence. Dolls with movable joints or clay figures are often used in stop motion for their ease of repositioning.

How will it help the participants?

First and foremost it is going to be a fun session full of experiments and explorations and children will love it.
• Children love animation and they would learn how to make their own little stories come to life.
• It would help them express themselves using simple forms and colours.
• Offers children ownership and autonomy.
• Introduces them to the history and evolution of animation.
• The creative constraints of the medium encourages problem-solving.
• Fosters iteration and experimentation through trying and testing.
• Encourages children to project and plan out where a story is heading.
• Gives them a sense of focus and direction. 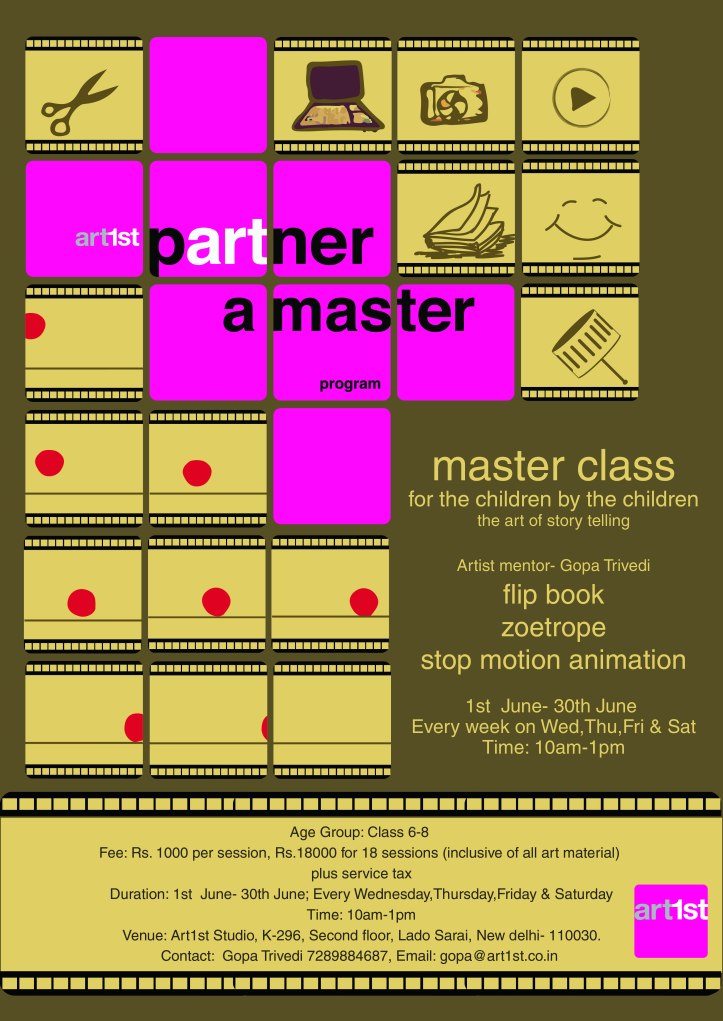