We have discussed through various examples, how curator weaves a narrative through objects and artworks in an exhibition. These narratives offered a larger picture about our history and heritage instead of only limiting the exhibition to the artworks and artists. We have seen examples of curators such as Naman P. Ahuja, Ranjit Hoskote, and through the exhibition ‘Where in the World’ how interesting narratives about our present and past can be told through artworks. The Sanskrit word for narrative is Aakhyan. It also means story-telling. India has myriads of story-telling traditions. These traditions are part of a living tradition which means it is continuing for centuries and one can trace it back to history. These practitioners use interesting objects such as scrolls, puppets, masks, etc., to tell these stories. For example, the patuas of Bengal carry illustrated scrolls to tell stories, scrolls from Gujarat portray Jaina myths and the Rajasthan depicts the story of Pabuji and Dev Narayan. Besides these long scrolls from Tamil Nadu and Andhra called yama patas are used to talk about the journey to hell and heaven.  Besides scrolls, masks and puppets are also used in this purpose. Performance traditions across India uses masks. Many of us know about performances like Krishnanattam, Kathakali, Chau, Ramlila, Aji Lhamu, Chham, etc., which uses mask as an important element. These masks are made of different materials. Also important is the use of puppets in performance. Shadow puppetry is a popular performance item in many parts of India including Odisha, Karnataka, Kerala and Tamil Nadu. Let us see how can one weave a narrative about narratives and curate a show based on this tradition and the various objects used. In today’s Art1st’s “The Curator” series we introduce you to the exhibition Aakhyan: A Celebration of Masks, Puppets and Picture Showmen Traditions of India curated by Jyotindra Jain and Dadi Pudumjee for IGNCA.

Exhibition: Aakhyan: A Celebration of Masks, Puppets and Picture Showmen Traditions of India, 2010

I have introduced you to seminal art historian Dr. Jyotindra Jain, today I will also introduce you to Dadi Pudumjee who is a leading puppeteer from India and also the founder of The Ishara Puppet Theatre Trust.

Pudumjee also holds a significant collection of masks from different parts of India. Even if you are not familiar with Pudumjee you must be familiar with his masks. You don’t believe me right? I am sure most of you have seen this song from the movie Haider.

The masks and puppets used in this song are from Dadi Pudumjee’s collection. Dudumjee’s performances and shows have travelled nationally and internationally.

Aakhyan, the exhibition was the celebration of masks, puppets and picture showmen tradition of India. According to IGNCA “Aakhyan brings together three distinct traditions of masks, puppets and picture scrolls of India, focusing on the artistic expressions in the visual and kinetic narratives. At the core of the ever- fascinating multiplicity of Indian storytelling lie the epic worlds of the Ramayana and the Mahabharata and the Puranas.” Furthermore, “The art forms chosen for this event, in their diverse manifestations, represent the larger picture of the cultural landscape of India denoting rituals, epics, legends and ballads, and contemporary narratives. Masks, Puppets and Picture Showmen are living traditions in many parts of the country with a formidable variety of vibrant expressions. By bringing these together, IGNCA is making an effort not only to showcase the rich diversity of masks, puppets and picture scrolls in the larger matrix of storytelling traditions in India but also to project the artistic significance of each form.” 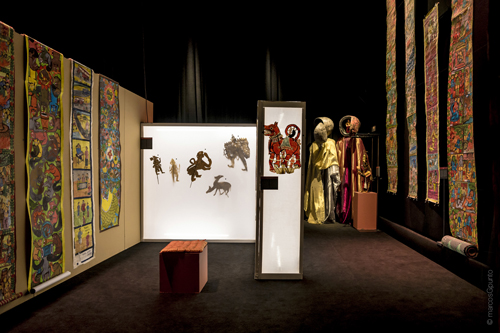 According to Dadi Pudumjee, “Akhyan attempts to present some of these living traditions of storytelling not just as museum pieces, but as a portrayal of the rich cultural performing arts and crafts of India — the exquisitely carved wood, costumes, jewellery, painting and the techniques of manipulation & presentation which have survived many centuries — highlighting the Indian tradition, where the object is given life and projects its creator’s ideas and essence, through narration of stories of gods and demons, heroes and common people, of love and affection, and beyond.”

In the wonderfully illustrated catalogue produced by IGNCA, Dr. Jain gives a historical account of the story-telling tradition and picture-showmen tradition in India. By picture-showmen we mean performers who carry images to narrate stories. Using references from classical textual sources, he gives a detailed account of this tradition from different parts of India. It is a must-read essay on the picture-showmen tradition of India. He observes that, “Indian traditions of storytelling, often accompanied by painted panels or scrolls, can be traced back through literary evidence to at least the second century BC and are known to have existed almost all over the subcontinent. Buddhist, Brahmanical, and Jaina literature contains abundant references to the art of painted scrolls (pata chitras) which were exhibited in ancient times to educate and entertain the people. Classical Sanskrit literature has several references to yama patas.”

This show also used pictures and masks which were related to the contemporary adaptations of these. For example, the picture scroll from Medinipur on Indira Gandhi murder. ‘The mid-20 century scroll titled “After Independence” depicts, with a tinge of sarcasm, the family tensions, social conflicts and agony that arose from the breakdown of existing moral values and economic structures, the effect of modernization around the time of India’s independence.’

This exhibition had also accompanied by various performances.

You could download the catalogue from here and see the images and read the essays. http://ignca.nic.in/PDF_data/aakhyan_brochure.pdf

Have a wonderful weekend. Feel free to share your thoughts, comments, and discuss.