AER 2019 has been envisioned to be a series of roundtables in different cities across India debating and deliberating over the crisis of arts education in India and to chart out newer directions in the project to redefine how art is disseminated in the Indian education system. The AERs plan to bring together experts from the fields of art history, curation, pedagogy, literature, performing arts, policy making, entrepreneurship, psychology, and the stakeholders of this vision to encourage active interactions among them. As such, the format of the AER is not a passive panel discussion; the focus would instead be on creating a space for knowledge flow and concrete discussions. 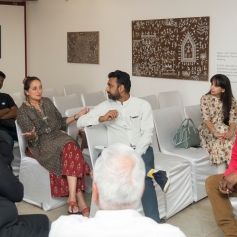 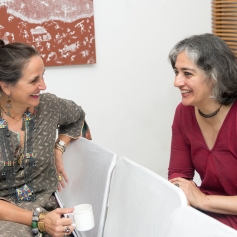 This year the AER will travel to 7 cities in India -Delhi, Kolkata, Baroda, Bhubaneswar, Chennai, Mumbai and Guwahati – culminating in an annual seminar in Delhi which would invite papers from scholars and practitioners world-wide. The Annual Seminar is organised in the memory of noted artist and pedagogue Tushar Joag,  the advisor of Art1st Foundation, who passed away in 2018. He was a remarkable artist and a passionate activist who was also actively engaged in the development of arts curriculum at the school and the higher education level. His belief in art education being an integral part of the growth of children and youth inspired the vision of the Art Education Roundtables 2019.

After the introductory session by Achari, Kattyayani Joag-Samant, daughter of Tushar Joag, paid her tribute to the pedagogue.

The session had three short talks by the invited panelists, followed by a moderated discussion which led to an integral part of the AER, the open Q&A session with the audience consisting of stakeholders from in and around Delhi.

“Art – a medium through which all learning takes place”

Naman P. Ahuja, a curator and an art historian, brought his recent research on Devi Prasad to the roundtable to highlight a unique educative model, based on Nayi Taalim, Mahatma Gandhi’s last major movement which ran from the ashram at Sevagram. In his book The Making of the Modern Indian Artist-Craftsman: Devi Prasad, Routledge, DElhi, 2011, Ahuja explores Devi Prasad’s role as an art teacher at the ashram while being employed to run the Nayi Talim project. Drawing on his experiences, Devi Prasad wrote a bestselling book in Hindi called Bachchon ki kala aur shiksha (All India Sarva Seva Sangh Publications, Varanasi, 1959), which was later translated as Art, the Basis of Education (National Book Trust, Delhi 1998).

The book shows how the Nayi Talim project can be adapted as a practical system of learning which uses art to disseminate learning and knowledge across genres and subjects. “Devi Prasad’s writing offers us a theory we sorely need to construct education through art—where art is not a separate subject, but an integrated aspect of everything, all subjects, the very medium through which all learning takes place. The theory helps us grasp the thread that ties together Devi Prasad’s life as a teacher of art, an artist, and as a pacifist. It also offers us a means to understand why education which allows us to stay indifferent to violence and war is no education at all.” (Extracts from Ahuja’s talk)

Sanjna Kapoor spoke about the critical necessity of fostering creativity and ingenuity in school children, the basis of which is that education should be focussed on the child as an individual. She cited the important artistic influences in her life which had enabled her to realise that theatre and the arts are so important, and central to child development. Badri Narayan’s class in her school was particularly transformational for her – “He came into the room with all of him. He wasn’t pretending to be a teacher, or having to worry about curriculum… And he really made us all feel extraordinarily special. And it wasn’t that we all went out to become artists at all, that wasn’t what it was all about. It was the world he brought to us, and it was the world that was really really important.” 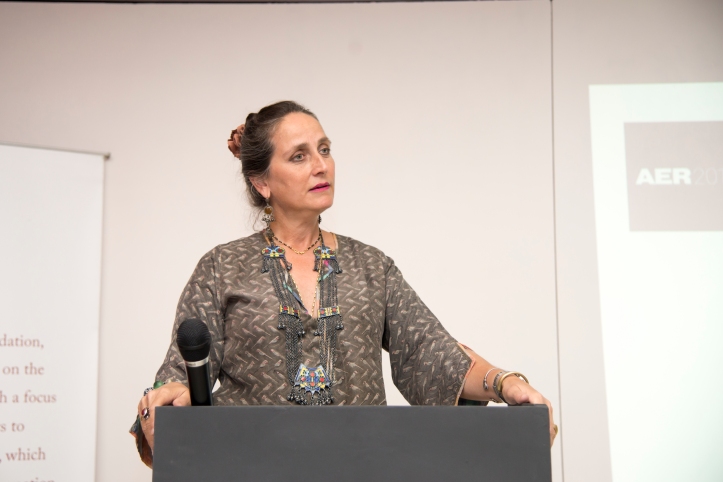 Ms. Kapoor does not agree with the practice of having every child up on stage for the annual day – “Why does every child have to get up on stage…for the parents, that’s why. So again, who is important here? Who is at the centre of our focus? Every child can do many other things than get up on stage which all have to do with being part of the creative process.” She spoke about her childhood growing up with her two grandfathers, who were both involved with theatre, and how her mother took away pressures of academic excellence when she was scared that she would fail – “She said “If you fail, and you don’t go back to school, what will you do?” I said, I’ll join my grandfather, I’ll join the theatre company. And she said, “Okay.” Can you imagine that? And it liberated me!”

V. S. Kundu presented a case study of how his team tried to realign curriculum in the State University of Performing and Visual Arts, Rohtak to create better artists and learners. He particularly emphasised on the ennui and restlessness of the students pre-curriculum realignment. However, he also noted that post the shift, majority of the students were confused by the sudden challenges and a liberty of thought. He said that the confusion pre-empted a success in itself – a success that the shift actually impacted the students and pushed them to re-evaluate and re-examine what they had learnt or been taught up until then. This curriculum shift had art education at its heart. He also emphasised on the importance of enabling teachers in the resource-poor regions to be able to guide their students towards a better appreciation for art and an informed/ sensitised consumption of art.

After the 10 minutes of talk by each panelist, Mr. Achari initiated a roundtable discussion highlighting the need of a systemic art programme at the school level, the gap between policy making and implementation and the panelists’ personal experiences of being artists and how that has fed into their identities.

The open Q&A session drew diverse questions regarding inclusive education for differently-abled children/ youth, current indifference towards the crises in arts education in India and the marginalised status of arts in the canon of marketable/ bankable education. “The task is not easy, but this discussion is a start.” The Delhi AER focussed on raising a plethora of questions and challenges with respect to the crises and industries being addressed, which are to be carried forth and deliberated upon in the upcoming series of roundtables.

The second in the series will be held on the 26th of April 2019 in Kolkata at Alliance Française du Bengale, Park Street. It will have Amit Mukhopadhyay (Curator and Art Historian), Bishnupada Nanda (Professor and HOD, Dept. of Education, Jadavpur University) and Tapati Guha-Thakurta (Professor in History, CSSS, Kolkata) as speakers.