It was pitch black outside, just a little after 3am. The children were wide awake.
Hold on! Don’t jump to conclusions- they weren’t up for our workshop. It was the usual case of a power-outing. This meant that we were surrounded by bleary eyes and yawning mouths. The sleep deprivation did nothing to dim their excitement- they were up on their feet, ready to explore, learn and savour the world of art.

This week, we continued getting to know ourselves better. In an activity called ‘Me and Myself’, everyone had to list down ten things about themselves. This included personality traits, habits or things they admired or enjoyed. Would it surprise you if we told you that popular answers included games like PUBG and football? A few struggled with self-reflection but eventually got the idea. ‘I like helping my mother… but I also love to read,’ said Pravin shyly. 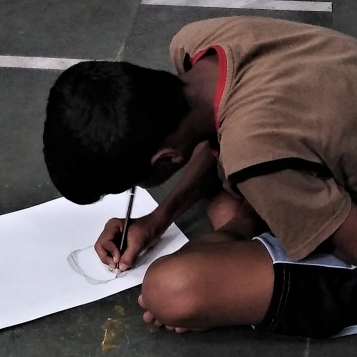 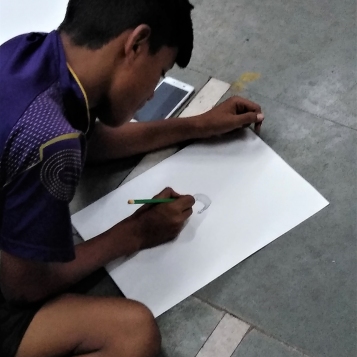 And this was just the beginning! The children began exploring different visual representation of these traits. Gradually from writing about themselves to converting the text to visual, and every child began developing unique representations and styles. As their creations evolved, we started a conversation about colour. Can you name and remember three shades of Red and three shades of Yellow? Engrossed in the process of painting, they began to organically understand the properties of acrylic colour and how to make new shades. 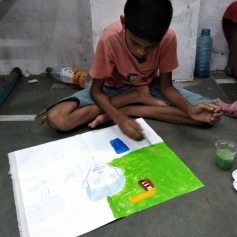 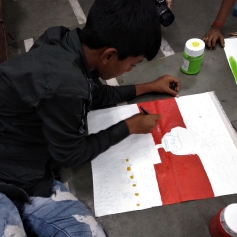 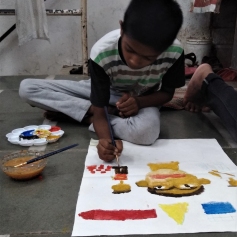 We then drew their attention to ‘detailing’. What happens if you add or subtract something from your painting? Both Ramzan and Divakar were painting football fields. First, Divakar added some dots on a yellow background as a top view of football players. Then, upon thinking a little more, he added suggestive hands to make them seem closer. First, Ramzan very patiently drew the football field and the players. He didn’t want the details to overlap, so he reconsidered the audience and focused more on representing the field and himself. Each child had their own pattern of working and responding in the process of painting a self-portrait. 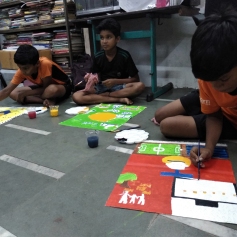 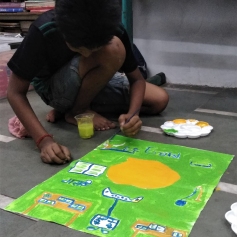 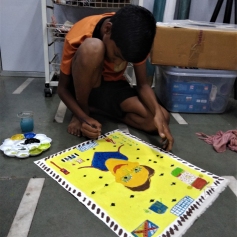 ‘Do you think this looks like you?’ we asked the group. Most of them said no.
‘Let’s ask everyone else what they think. Does this look like Mustafa?’
Oh yes, they cried, that’s exactly his hair. Mustafa’s hairstyle was infamous!
A presentation of the basic forms of the face cut, jawline, hair, eyes and even eyebrows created a particular and recognisable self-portrait. Chandan discovered that he had been so immersed in his painting, that he’d forgotten to draw his ears. 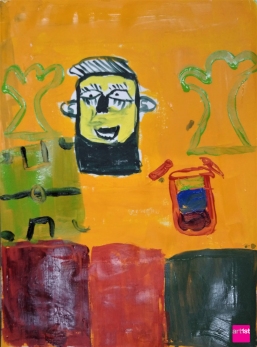 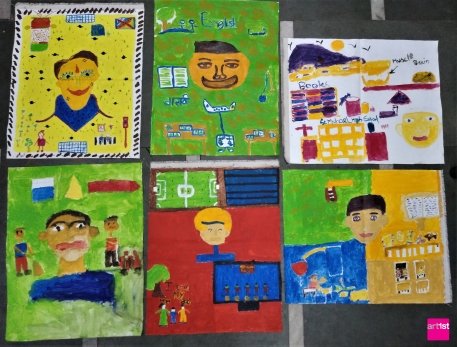 The aptest way to conclude is with an insight from the young artists themselves. ‘We are all familiar with getting clicked by a photographer and seeing ourselves on a screen,’ said the perceptive Divakar. ‘Today we actually paid keen attention to our own facial features as well as our own traits and habits.’