All the material was arranged in the center. Two of the children observed some black dust out of the box. One of them touched it with his finger tip then asked, ‘What is this black black powder? What are we going to do today?’  This is a charcoal stick, it is a drawing material and today we are going to explore it.

‘Have you ever found yourself in a ‘situation’?’ we asked them
Asif said, ‘A situation is when I am going to school and then something happened and I couldn’t go.’ Ramzan added, ‘A situation is when I want to go to play football and my mother asks for my help at regular household work.’  Through their answers they related situations where. due to some confusion, were unable to do something they wanted.

Next, we discussed charcoal, कोयला . Akshat joyfully was reminded that charcoal is that black piece in the box.  They all shared the various uses of कोयला, from it being used for cooking to roasting corn and its use for the functioning of the engine to extracting diamonds from कोयला mines.

And so we imagined a ‘situation’ wherein we were stuck somewhere, like a coal mine. ‘How dark is it?’ we asked them. Each took turns narrating their imagined experience, first with words and then on paper. For some, it was extremely dark, due to the closed setting, while for others, the darkness was mild, due to daylight.

Once done they had to think of a source of light pouring in the darkness. What kind of source is it? Is the light too harsh or light? What time of night or early morning is it? If the light comes in, what all things would be visible? They were to represent the light using erasers. Eraser as a tool has always been looked at with a sole purpose to remove mistakes from any drawings. Instead, here we were making the children look at the erasers as a drawing tool.

After that, it was time to talk about the middle tone and bring that in the composition. But what was a middle tone? They all responded, ‘the medium tone!’ Theoretically,  they understood what this meant. But what does it mean when you’re practicing? We broke it up for them and explained to them the concept of light, middle and dark. We went back to our previous exploration of shades and with the help of lemon yellow, permanent chrome yellow, ochre yellow and brown we described the difference of the tones.

Affan related an imagined adventure where he locked in my classroom and didn’t know what to do. He spoke of light coming through the window and the shadow of the window on the floor too. Later, he erased it and let a bold sharp patch of light fall on the floor.  ‘There were benches all around and I sat on them and gazed around’. You can see these benches in his work. 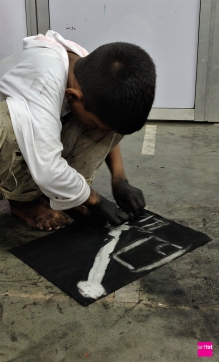 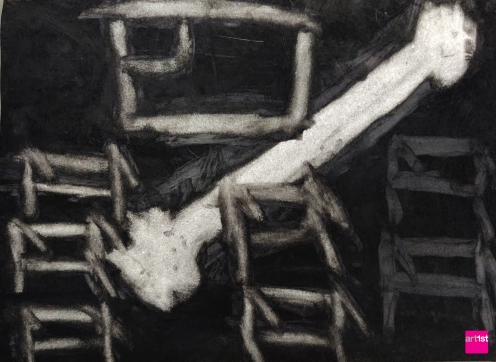 Hanzala’s point of view was from inside a car’s dikki(boot).  ‘It was extremely dark inside that deck(car’s dikki) and then I saw a ray of light coming in through the keyhole.’  He blocked out two wheels and he had this constant imagery of a heart which he depicted in his work.

Anwar related a true experience. He explained to everyone how once he was in the lift and the electricity went off. The only source of light was the fan on the top. Very patiently he drew the rays of light with a suggestive fan. When asked to add details with middle tone highlighting to an object in the situational space, he bought the elevator buttons into visibility.

Each child expressed the roller coaster emotions of their situation. Some were imagined narratives while others were true experiences. They could all interpret and convey these in their independent manners, with careful attention to details.