The best children’s books are the ones that can explain awful circumstances in a way that kids can understand.

“Smoky Night” by Even Bunting, was inspired by the L.A. riots. Though not the ideal bedtime story, it is worth being read. It conveys the message of the effects of urban violence on a child but also tells a beautiful tale of coming together.

Daniel and his cat stare out their apartment window at the streets below as people loot the stores. He cannot understand why this is happening, how people can look angry and happy at the same time. Daniel is confused by this, and rightly so. These people are taking an odd joy in what they do. Even as they destroy and steal they act happy with what they’re doing.

That night Daniel is woken up out of his bed by the shaking of his mother. The apartment building is on fire, and the boy cannot locate his pet cat Jasmine. In the panic he’s forced to leave without her and stay in a shelter that night with his mom. Mrs. Kim, (Korean) a neighbour of Daniel, is missing her cat as well. Suddenly a fire fighter enters the building, both cats under his arms. Where once the cats used to fight one another, now there is a bond between them. A similar attempt to make peace with Mrs. Kim ends with pleasing results.

The tale also acknowledges the dark side of human beings. Though it’s clear that Daniel and his mother are not “bad people”, he notes that the reason he and his mother do not shop at the store of Mrs. Kim because, “Mama says it’s better if we buy from our own people”.

The illustrations for this book, by David Diaz, work exceedingly well. The thick heavily stylized drawing with bright neon colors. His use of collage to create unique chaotic pictures is complimentary to the story being told. 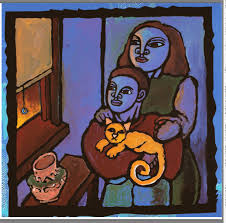 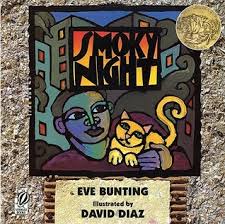